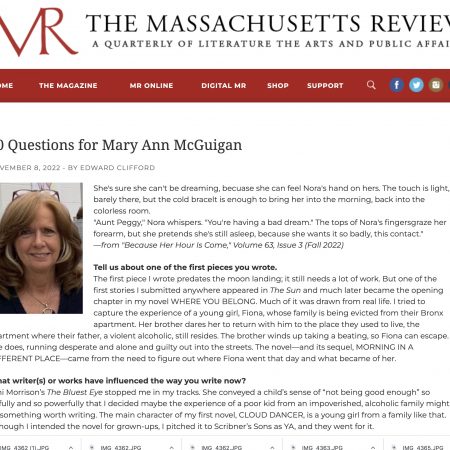 The Massachusetts Review offers interviews with its contributors, with questions about their writing. Here’s mine.

Read an interview with Mary Ann McGuigan in the Massachusetts Review

The Start of the Story

I don’t always know where the idea for a story comes from. That’s because my stories often evolve into something altogether different from what I originally intended. That wasn’t true for “Because Her Hour Is Come,” the story published the Massachusetts Review‘s fall issue. From the start, I wanted to tell the story of a woman, Peggy, who waits too long to tell the truth and winds up missing out on the most important connection in her life. Peggy’s niece is in fact her daughter. But by the time Peggy is ready to share that, she’s in a nursing home, with dementia eroding the edges of her consciousness. Here’s how I explained the idea for the story in my interview:

What inspired you to write this piece?

The character Peggy is drawn from my aunt, a very Irish-Catholic, very successful business woman. She never married, never had children. By the time I was in high school, I admired her accomplishments and appreciated how she tried to steer me in the right direction. But in her last years, she had to give up her New York apartment and live in a nursing home. I served as her guardian for those years. She was used to being in charge and she could be very difficult. Even as her dementia worsened, she was often remarkably sharp and articulate. Being guardian was time-consuming (and painful) and I imagined it would have been easier had I been caring for my mom. After my aunt passed away, the story came: What if she had been my mother but kept it a secret until it was too late?

Writing, for me, is a way to connect. The particulars of who we are—our looks, our jobs, our upbringing—may be very different. But as members of this crazy tribe called humans, the feelings we experience are often very much alike. Which explains my answer to the question about what has influenced my fiction:

What writer(s) or works have influenced the way you write now?

Toni Morrison’s The Bluest Eye stopped me in my tracks. She conveyed a child’s sense of “not being good enough” so artfully and so powerfully that I decided maybe the experience of a poor kid from an impoverished, alcoholic family might be something worth writing. The main character of my first novel, CLOUD DANCER, is a young girl from a family like that. Although I intended the novel for grown-ups, I pitched it to Scribner’s Sons as YA, and they went for it.