It’s 1963. They’re marching in Washington—Even people from the Bronx 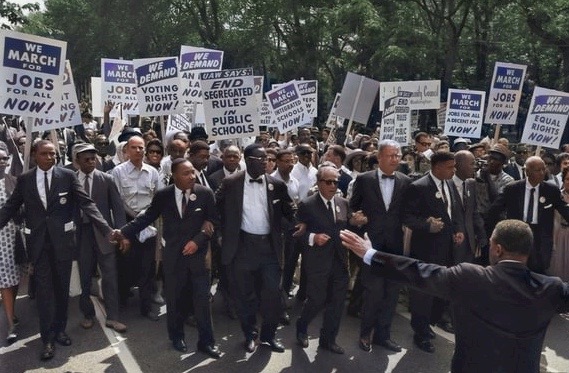 —including Fiona’s friend David and his mother!

[From Morning in a Different Place, Bronx 1963, Fiona learns that her friend David Silverman went to the March on Washington with his mom and Mrs. Carson, Yolanda’s neighbor.]

“Mrs. Carson is your friend?” says Yolanda [to Mrs. Silverman].

“Well, an acquaintance really. But we’ve gotten to be close very quickly. We went to the march together.”

“The march?” I say, ’cause I’m wondering if [Mrs. Silverman] belongs to SNCC too, like Yolanda’s Aunt Cheryl, and goes marching in the South.

“Yes, the march on Washington last summer,” she says. “David came with us.”

Yolanda’s jaw hasn’t exactly dropped, but she’s impressed. So am I, actually. When they show footage on TV of the people who went to the march on Washington in August, you can see that a lot of them were white. I keep wondering where they’re from, ’cause I never meet any of them around here. I don’t know any white person except President Kennedy who has the courage to stand up for colored people’s civil rights. Most white people don’t want to give them any at all. And now I’m actually meeting one.

“You went to Washington?” Yolanda says, turning to David.

“It was really something,” he tells her. “Except for all the singing on the bus. That drove me nuts.”