She Knows What Her Parents Have Told Her. Now She Wants the Truth.

At sixteen, Morgan Lindstrum has the life every girl dreams of – at least that’s how it appears. A privileged only child, she has everything she could ever want, except her parents’ attention. A Princeton physicist and a high-powered executive, they barely have time for each other, much less for Morgan. When her beloved grandfather dies, depriving Morgan of the only steadfast person in her life, she forces her way into her mother’s secret past and learns he was never her grandfather at all. To find out the truth about her family, Morgan makes her way to Brooklyn, where she meets Terence Mulvaney, the Irish immigrant father whom her mother disowned. Morgan wants answers, but instead of satisfying her curiosity, Mulvaney shows her the people in his condemned tenement building, who are suffering and have nowhere to go. He challenges her to help them by tearing away the veil of shame and showing her wealthy parents and her advantaged circle of friends a world they don’t want to know about. The temptation to walk away from this ugly reality, as her mother did, is strong. But if she does, can Morgan ever really leave behind what she learned when she crossed into Brooklyn?

Brilliantly realistic. Readers who thirst for stories that contain all the grit, messiness, angst, and hope of humanity should pick this one up immediately. Perfect for readers who seek very realistic young adult novels, Crossing Into Brooklyn will break hearts … but leave just the right amount of hope to keep going

Morgan’s tenacity is admirable and the author succeeds in relaying Morgan’s discomfort and fear when confronting poverty. Good for fans of realistic fiction. 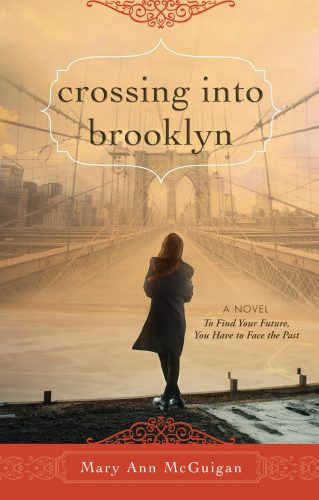 Read An Excerpt From Crossing Into Brooklyn

The closet smelled of my mother’s perfume, of her absence, the part that lingered when she left for Baltimore or Atlanta or Chicago. It was everywhere, inescapable. It clung to the designer suits on their curved hangers, shoulders slouching, like whipping boys. You could see it in the shape of her shoes, lined up like yes men, ready to swear to her lies.

I couldn’t find her precious project notes. She’d spend weeks on them when she was putting a proposal together. She kept them in little spiral-bound notebooks, had one with her all the time. I checked every drawer, every shelf, every bag. Nothing. Could she really have taken it with her, even to Grandpa’s funeral?

I stepped out of the closet, into the huge bedroom. The house was quiet, but my parents would be back any minute. The funeral luncheon was almost over when I got my cousin to drive me home. My mother didn’t see me leave. She was talking to my father, which had to be a first. The wake for Grandpa went on for two days and I never saw them speak the whole time. The three of us mostly stood in our dreary little reception line as people wandered in and greeted us with weak handshakes and loose hugs. They kept their coats open, ready for a speedy exit, and I wanted to follow them out the door, get out of my damn heels, get away from the whole mess.

Even before Grandpa got sick, my parents were doing their talking behind closed doors. The night before the funeral, I heard them in their room. What a sight I made, kneeling outside, my ear to the door, desperate. I could hear only bits and pieces. My grandfather needed a kidney. My mother was not a match. I knew all that. But my father kept telling her it wasn’t her fault he didn’t make it. It just didn’t add up.

That’s how I wound up searching her bedroom. I wanted papers from the hospital, from the doctors, anything that could tell me what the hell she was up to. But most of all I wanted to find her damn project notebook and shove it down the garbage disposal. After the Mass, as we got into the car, she told me she was going ahead with her trip to Chicago. What would it have taken to disrupt my mother’s business trips? Clearly Grandpa’s dying wasn’t enough. My soccer playoffs, two days away, didn’t even rate a mention. In the limousine, she reached for my hand as we passed through the cemetery gate. I stared out the window, pretended not to notice.

I opened the dresser drawers again, checked the jewelry box. Nothing. I was running out of time. I headed back to the closet, wanting to do something spiteful, defame the immaculate order of her little shrine to executive apparel. That’s when I noticed the briefcase tucked behind her velvet chair, its polished leather sides reflecting the light. It had two compartments that opened like an accordion, both crammed. I walked my fingers through some folders, pressing open one or two. No notebook.

A side pocket was zipped closed. I pulled the zipper along its track, smooth and silent. The compartment was deep, and I couldn’t see anything. I slipped my hand into the tight space, felt something tubular, wrapped in plastic. A tampon. I slid my fingers toward the other side, and found a paper folded small and tight. I pulled it out and opened it up. A letter. But it had been torn up, the pieces taped back together. Some of them were missing, leaving holes where the words used to be. The handwriting was large, a little shaky. The first few words were gone:
” . . . when Michael Mulvaney passed away.” Then something about a house, but most of that was blurred into the folds. Only two sentences were still whole: “If you could find it in your heart to come and talk, it would mean the world to him and to all of us here. Brooklyn is not so far after all.” Then one last fragment: ” . . . he asked for you to the end, M&M.” There was a date in the corner, September 19, and it was signed by someone named Clover.

Nothing in the note made sense. I didn’t know anyone named Clover. Who was Michael Mulvaney? And why did they want to talk to my mother? I reached into the side compartment again. This time I found a photo, a picture of my grandfather and me, taken when I was eleven. He looked healthy and strong. The pain of missing him came back in a rush, as if out of hiding, into my chest, into my throat.

What my mother did or where she went didn’t hurt as much before. But Grandpa was gone now, and my parents were even more distant, hardly speaking—to me or to each other. He’d been dead less than a week, and already I had trouble picturing him. I needed photos, and there weren’t many around. Our whole museum of a house had only two framed photographs: one of my parents on their wedding day and another of me—the official annual portrait of Morgan Lindstrum, in perfect hair, perfect dress—taken the year before, when I was fifteen. Photographers were paid to take both, and the work was done in a studio, the results touched up. My parents didn’t have much interest in seeing things the way they really were.

I was sick of all the pretending, all the secrets. That morning, after I got dressed for the funeral, I went downstairs to talk to them. They were standing in the kitchen and I asked them point blank what it was all about, why my mother wasn’t a match to donate a kidney. “Blood types aren’t necessarily a match, not even between parent and child,” my mother said, but she wouldn’t look at me.

“So that’s all it was? You didn’t have the right blood type?” I said.

“Then why did you have to tell her it wasn’t her fault?” I said to my father. He started to answer, but my mother cut in. She would do the talking, as usual.

“You must have misunderstood,” she said. “No one said that.”

My father busied himself with his phone. She was lying, and we both knew it.

I wanted my grandfather. He was never too busy for me. He was even upset that he couldn’t go to my playoff game. Like he didn’t have enough to worry about, with all the tubes and wires they had him hooked up to by then. When Dad was teaching at the University of Chicago, Mom started traveling more, but Grandpa looked after me. He liked to take me to the library. He listened to my complaints about school, made sure I brought gloves when it was cold. He was never pressed for time, never on his way to somewhere else. In the end, after we moved to Princeton, I was the one who had no time, no need to sit down with him, to walk to the coffee shop to get the paper the way we used to on Sundays. I had new friends by then, places to go.

I looked at Grandpa in the photo, smiling at the camera from behind my shoulder, his arms around my waist. I recognized the watch on his wrist. I closed my eyes and remembered how the long gray hairs curled around the gold. When he lost all the weight, he didn’t want to wear it anymore and gave it to me. The night he died, I took it out of my jewelry box and fell asleep with it beneath my ear, pretending I was resting again against his chest, against his heart beating.